In Ocean Thermal Energy Conversion (OTEC), microscopic life forms contained in seawater can attach themselves to the internal surfaces of the machinery. Such biofouling can be responsible for reduction in performance of thermal exchangers. To remove these biofilms, electrochlorination can be used to produce a disinfectant, sodium hypochlorite, directly from the salt water itself.

Electrochlorination is a chemical process which relies on the electrolysis of seawater as it flows through an electrolytic cell. An electrical current is passed between the anode (positive pole) and the cathode (negative pole) separating the salt and water into their basic elements. This chemical reaction results in a mixture of seawater, hydrogen gas, hypochlorous acid and sodium hypochlorite. The sodium hypochlorite can sterilise the piping of microorganisms present in the seawater.

What will we study in SIMBIOSE?

During a previous two-year test, electrochlorination proved efficient at preventing biofouling. However preliminary measurements showed a presence of by-products, which can be unpleasant for the marine environment. Hence, in the SIMBIOSE project, we aim to study the optimal quantity of sodium hypochlorite required, whilst minimising the unwanted by-products.

We will also study combining electrochlorination with biopolymers, which prevent microorganisms sticking to the metallic surfaces. These natural molecules produced by marine bacteria could help to reduce the concentrations of sodium hypochlorite required. 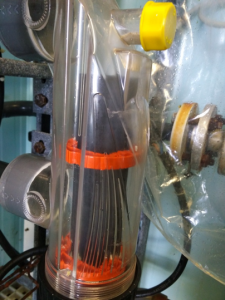 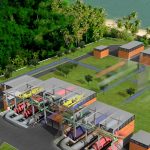 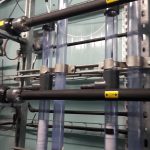